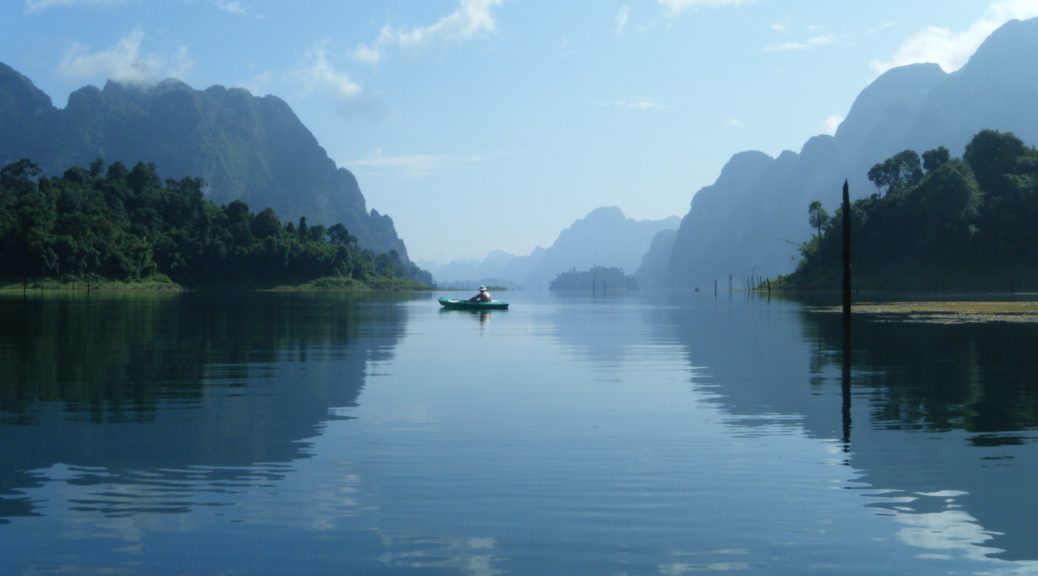 So picture this. You load up the gear, drive down a dirt road through an evergreen forest to a little backcountry lake positively brimming with fish. You throw your boat in the water, grab a cold drink and shove off into the crystal clear waters to enjoy a sunny afternoon of serenity and relaxation.

There’s only one problem with this. You don’t own a boat. And why not? Because you don’t have a truck or a trailer, or a roof rack. Not to mention you live in an apartment that is severely lacking in the extra storage department. Storage and portability. These are the two great barriers between you and watercraft bliss. I was in the same “boat,” if you’ll pardon my pun, until about three weeks ago when I decided to try out a collapsible kayak. And I don’t want to waste any more time before I tell you that I am very, very pleased with it.

Why a collapsible kayak?

Well, we’ve already touched on the space issue. Portability is extremely important for people like me who don’t own a house or who move a lot. Or for people like my mother who own their own homes yet still find themselves thinking, “where could I possibly put that?” on a semi-regular basis.

Portability makes transport about a million times easier. No need for a trailer, a roof rack or even a car larger than a Toyota Corolla. And no need to rent out that storage unit, so save you money and use it to buy more hiking gear. 🙂 Another added benefit is being able to take your boat to less-visited, harder-to-reach areas.

You may even be able to carry it in a large backpack, depending on your collapsible craft of choice, and get out to paddle in some really spectacular and remote areas!

You’ve got a few options when it comes to choosing your new boat. In this article, I’ll begin with a review of my own Tucktec foldable kayak and then add some information on other types of collapsible boats.

Keep reading to learn about all the collapsible watercraft available to you.

First up is the Tucktec kayak. This particular kayak is the one I chose to buy for a number of reasons and I can’t wait to sing its praises to you. I have more personal experience with this type of portable craft than the others. So I want to give a more detailed review, whereas the other sections will be an overview.

It’s a brilliant little design that transforms a 48in by 15in rectangle of thick plastic into a ten-foot kayak with a 350-pound capacity.

I’ve wanted a kayak for years and decided to go out on a limb and try this one out. The decision wasn’t too difficult as the price was spectacular! I couldn’t wait for it to arrive and luckily, it came just in time before a family vacation to my grandparent’s cabin on the Snake River.

I got home from an 8-day work stint in the field, exhausted, but even so I immediately tried to set it up for the first time in the living room. And this is where I ran into a bit of a snag. It was hard to assemble! The website claims two minutes but I couldn’t seem to make sense of the printed instructions and a couple of videos on the Tucktec website. (They’ve updated their design and have yet to update the instructions with continuity. Instead, you have to follow the old instructions and then fill in the blanks with a second video.)

Anyway, I was tired, I was sweating, and I was afraid I might break my kayak but the 3-year warranty convinced me to persevere. I must admit that I thought a few times of just sending the dang thing back. Somehow, after much huffing, puffing, muscling the thing into position, and a couple of hours I got it all set up on my living room floor.

And you’ll never guess how long it took me to assemble it the second time. Less than five minutes! I’ve done it several times now and it’s simple as can be. It would have been nice to get a little warning from the Tucktec website that the first-time set up would be difficult. Perhaps then it would have been less discouraging. So now I’m warning you. If you buy your own Tucktec, it WILL be quite hard to set up the first time. But don’t give up! It’s worth it.

But boy am I glad I pushed through. Field testing it on the calm waters of Big Springs and even some (very) minor rapids in Box Canyon was delightful. My Tucktec feels slightly tipsy but didn’t capsize when I rocked back and forth several times. My brother and I were able to sit it in simultaneously although the more weight, the more unstable it gets.

It took the little “rapids” well if I cut through them lengthwise. However, it was easy for water to slop through if I ended up going through broadside. But due to the high weight capacity, I could stand to have a couple of hundred pounds of water splash into the thing and still be below the weight limit.

The Tucktec kayak comes with a tracking fin that you can raise when you’re in shallow water. While paddling, it’s easy to feel that the fin does a lot to keep you paddling straight and turn easily. It’s not hard to control the kayak so it’s great for casual paddlers and beginners.

Overall I would feel comfortable taking my Tucktec on calmer rivers and lakes, but I wouldn’t venture out with it into rougher waters. It’s not a technical kayak. The Tucktec is better suited to leisurely floats or calm fishing trips.

==>Click here to go to the official Tucktec site<==

If you’re hoping to find a more technical yet still foldable kayak, you may want to check out the kayaks by Oru. Oru sells kayaks geared towards sea travel. Their higher-end models are good for rough waters including waves. But expect to pay quite a bit more than you would for the Tucktec even for their lowest priced product (think a few grand instead of a few hundred.)

Oru has both beginner models and high-performance kayaks. They all weigh around 30 pounds and fold down to the size of an art portfolio. Oru owners seem to love their kayaks as attested by the many excellent reviews. But it does take a little longer to set up than the Tucktec does. However, the 20 minutes it does take is still an excellent set-up time.

When you think, “portable watercraft” there’s a good chance that an Inflatable craft was the first thing to pop into your head. Compared to foldable kayaks, the variety and brands of inflatable kayaks increase tenfold. After all, the concept of inflatables has been around much longer.

Depending on what you want in your inflatable kayak, this may be the cheapest option. One of these boats can cost you anywhere from eighty dollars to a couple thousand. And they can vary in style from casual paddler to white-water ready.

Inflatable kayaks are able to be deflated transported and reinflated. This is a plus, but it has some caveats. Keep in mind that you’ll need a reliable air-pump with the correct attachment for your particular craft. And it can often take quite a bit of time for the kayak to inflate.

My grandparents own a few and choose to leave them mostly inflated, transport them with a trailer and top them off with air when needed. This cuts down the set-up time but sort of renders the portability factor useless.

If you choose to go with an inflatable kayak be wary of sharp objects, and leaks in your craft.

==>Here’s an excellent inflatable kayak ready for any condition, be it whitewater or flat<==

Pack rafts are also inflatables. But I wanted to make sure to mention them here because these are the ultimate backcountry ready watercraft.

The goal of the pack raft is to be a capable boat when needed yet practically disappear when not needed. They can weigh as little as 3 pounds, pack down to the size of a first-aid kit yet still carry a capacity of over 200 pounds when inflated. These boats are meant to be carried into the backcountry and used for multi-day hiking/rafting expeditions. You can literally take these babies anywhere.

The main trade-off you deal with in pack-rafting is weight vs. stability. Lighter boats are good for calm water, whereas whitewater will require a boat of 8 pounds or more. Still, exceptionally light!

And, as holds true with everything in backpacking, the lighter, smaller, and tougher it is the more moolah you’ll have to shell out for it. But don’t lose hope, depending on your rafting preferences you could spend as little as two hundred bucks on a basic flatwater packraft. Even the high-end whitewater rafts won’t get too far above a grand.

There’s Something For Everyone

The world of collapsible watercraft certainly has something for every adventurer and any budget. Hopefully, this article has allowed you to quickly learn about, and compare the different types of collapsible kayaks and similar craft that are available to you.

I for one, love my new Tucktec but I think a packraft is next on my list of toys to acquire.

Do you already own a portable watercraft? Let us know about it in the comments.

And of course leave any questions, comments, or concerns below!