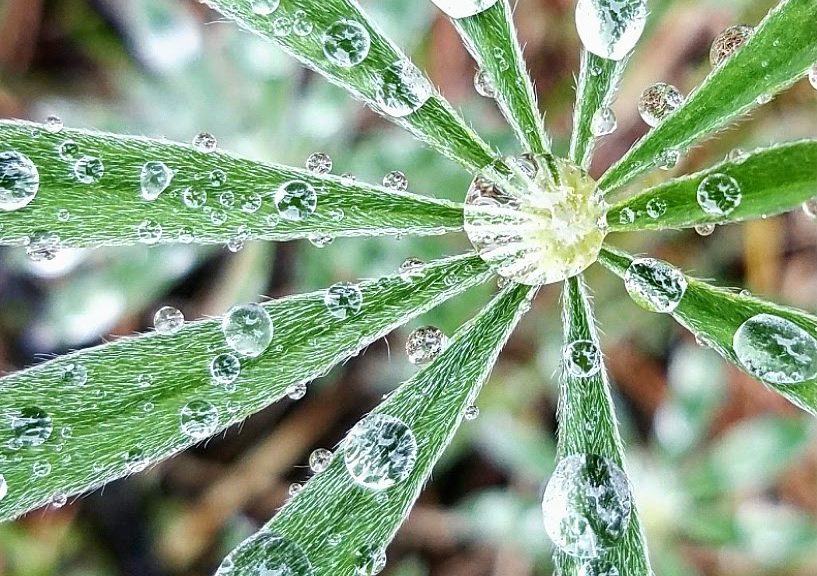 Today the rain pounded relentlessly on my head except for the times when it changed to the soft feathering of snow. Luckily my jacket held it mostly at bay. My “waterproof” boots didn’t fare as well as they were assaulted with the dewy grasses and snowflakes that survived the long journey from sky to ground. But the forest is dazzling in the rain. It fills me with its breath and plants its icy kisses on my nose. Surprises drip from every leaf into the silent pine needles below.

It was a late winter’s rain. The air was heavy with it. The water, on it’s journey from sky to ground, diverged and reunited. Reunited and diverged. Molecules separated from heavily condensed clouds and the drops danced on their way down. And sang their soft songs.

From the perspective of a raindrop, the impact with the ground must be tumultuous. A drop explodes on impact into tiny, shattered fragments. But even as the water separates it begins to coalesce, forming rivulets and trickles. The true headwaters of any mighty river are found falling from the sky.

I imagine myself to be a microscopic being. I see the world from below the clouds. Giant bombs of water crash around me. I hope that I will not be crushed. The earth is a pock-marked face. I race around the gullies, hoping I will not be caught in the next erosional event.

Thankfully I reach a lupine plant. The leaflets are long and slender, yet dense. They trap the water bombs on their tiny hairs drinking in what they can and saving the rest for later. The water, though currently a hazard to me, is salvation to the lupine. Like all plants, it draws the water from the soil, into the roots, transporting it molecule by molecule up the stem to be breathed out of the leaves and released once more into the atmosphere.

I stand up from the lupine plant, shaken out of my tiny fantasy, and turn my face to the sky. The rain has turned once more to snow. I let the flakes flutter down to rest on my eyelashes, and think that we are not so different. The lupine plant and I. We are both connected to the cycle of the water.

We are both transformed in the forest rain.

7 thoughts on “The Forest Rain, a Lupine, and Me”